I know I often talk about our sweet friend Debbie. But it's because she is so greatly missed by our family. Thursday was the one year anniversary of her homegoing to the Lord. And so I have to pay homage to her here once again. It's not very often in your life that God places you in the path of someone who personifies His very face. Debbie certainly was such a person. She was such a bright light in our lives, and everything she did and said came from her love for the Lord. When we first met Debbie, she was just on the cusp of finding out she had cancer. And from the very first, she handled every difficulty that came her way with a dignity and a trust in the Lord that I'm not sure I could ever have. She taught me so many things, among them- how to be a prayer warrior. She taught me that prayer is so important and would always tell me she was praying for me. And that I could call her any time and let her know my troubles so that she could pray. I, in turn, learned to pray for her. I am sorry to say that I haven't lived up to her example, but I'm not sure that's possible. She never complained for complaining's sake, she never let it show on her face how much pain she was in or how bad she felt. When she was sick, she said playing with her "babies" made her feel better. When her hair fell out, she showed Charlie and Madeline how her new hair "fell off." When the end came nearer, and I was pregnant with Caroline, she said with certainty that she would "see that baby." And she did. When we would talk about the end, she said she was sad but also excited- "I get to see Jesus!" Grace, Faith, Love, Trust, Dignity. These are the things I think of when I think of Debbie. And of course my selfishness in how very much I miss her. I long to hug her neck and savor her scent. I long to hear an "I love you so much!" I long to see her face light up when she sees my kids, and I long to watch her excitement at watching Caroline's firsts. But God gets to have her now. And I'm jealous. But I know that it's right, and I have Debbie to thank for that as well. 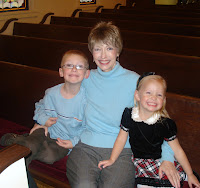 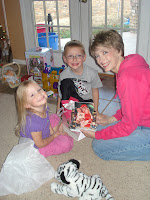